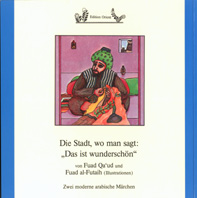 I am actively looking for high quality Arabic children's books and Arabic youth literature with subjects which are appealing to a German speaking readership. So far only a few children's books have been translated from Arabic to German as my list Arabische Kinderbücher in deutscher Übersetzung (in German) shows.

In autumn 2020, a picture book from Lebanon in my translation from Arabic appeared in the German publishing house Susanna Rieder Verlag, Munich.

Several picture books from the Arab World in my translation have already appeared in bilingual Arabic-German editions in the German publishing house Edition Orient, Berlin. Edition Orient has published one of these books in different editions: as bilingual picture books in several language combinations and as a multilingual audio book. The audio book was produced in the project Lilo Lausch of Stiftung Zuhören in cooperation with Hessischer Rundfunk (HR2 kultur) and Vodafone Stiftung Deutschland.

Poems for children in bilingual Arabic-German versions in my translation from Arabic can be found in a calendar which is edited by the International Youth Library Munich. This multilingual calendar presents illustrated poems from around the world in the original version together with a translation into German. Starting with the edition for 2019, it is published as Der Kinder Kalender in the publishing house Edition Momente. Before, the calendar of the International Youth Library was called the Arche Kinder Kalender and it was published at the Arche Kalender Verlag .

I am bringing together various texts on Arabic children's literature at this web site. Have a look at its French and German pages, too.

My interest in Arabic picture books for children goes back more than twenty years. In the translation of picture books, the interplay between text and illustration plays a central role. My interest in this interplay has let me recently to illustrated literature for adults: On behalf of the Goethe Institute Cairo, I have translated some comics and the main part of a graphic novel for a German-French publication project.

Moreover, I am a Ph.D. student at the Institute for Computational Linguistics in the University of the Saarland in Saarbrücken. My research interests are also in the area of logic and formal semantics of natural language. I am a physicist by training.

This website has been recommended by The Society for the Promotion of African, Asian and Latin American Literature (LITPROM) and by The German Education Server - The Internet Guide.